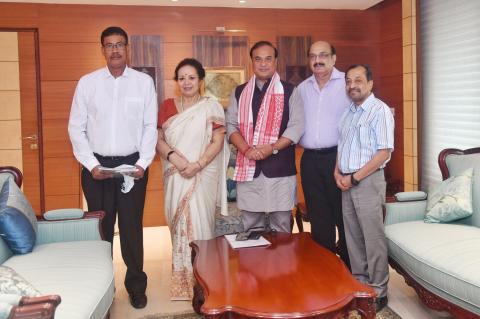 New Delhi 22nd July 2022 - A delegates of Assam Association, Delhi visited and met Dr. Himanta Biswa Sarma ,Chief Minister , Assam in Assam House at around 4:00 PM and contributed an Cheque amounting Rs 1( One) Lakh towards Chief Minister’s Relief Fund Assam for flood relief in Assam . As per the appeal , several persons contributed towards the Flood relief of Assam . During the meet, a few other discussion were held where Hon’ble CM has agreed to become Life members of Assam Association Delhi along with his wife. In response on the release of 2nd instalment of Rs 20 (Twenty) Lakh from Govt of Assam towards infrastructure development of Srimanta Sankaradeva Bhawan as the first instalment of Rs 30 ( thirty) Lakh had already been utilised , he told that he had already instructed DC Kamrup to release the next instalment as soon as UC is received . When requested was made for an interaction with the Assamese Community living in Delhi NCR in coming days, he expressed his desire to visit Srimanta Sankaradeva Bhawan shortly to meet the community people.