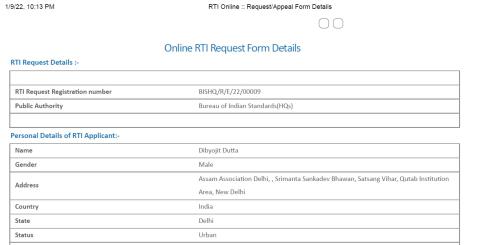 One RTI has been filed on 9th January 2022 to Bureau of Indian Standards (BIS), Department of Consumer affairs, Government of India New Delhi by Dibyojit Dutta, General Secretary Assam Association Delhi on their reports submitted to Unicode Consortium on Assamese script in Unicode platform , updation of Unicode Block name from ‘Bengali’ to ‘Bengali -Assamese’ etc.
It is to be mentioned that there has been long resentment on recognizing of Assamese script in Unicode . The Assamese scripts are put together with ‘Bengali’ scripts in the same group and named the Group as ‘Bengali’. Though there are several instances where several scripts having similarity are placed in single Block but with acceptable Block name viz. In Europe , hundred of scripts viz. English, French, Dannish etc having similarity are put in the same Unicode Group code chart but allotted acceptable name viz. ‘Latin’ (instead of English). Similarly it has been felt that similar approach should be taken for Bengali, Assamese, Manipuri languages having similarity in their scripts viz. instead of naming this Group as ‘Bengali’ , a more acceptable name should be allotted .
This issue was conveyed to Unicode Consortium by General Secretary, Assam Association Delhi with a request to take appropriate corrective measure. In response , Toral Cowieson, Executive Director & COO, Unicode Consortium , informed through e-mail on dated 29th Aug 29, 2021 that some of these issues were brought to JTC 1/SC 2 in the year 2018, and a set of recommendations were made at an ad-hoc meeting regarding Assamese. Progress on those recommendations has been awaiting further input from the Bureau of Indian Standards (BIS). Updating this section from “Bengali” to “Bengali and Assamese” was part of the aforementioned recommendations, with progress awaiting further input from BIS. However, as you are raising this specific proposal again, it could be considered by the Unicode Technical Committee for an upcoming version of the Unicode® Standard.
He further informed that in Unicode, it is normal for a script to be shared by two or more, even hundreds of languages viz. the Arabic script is shared by many languages including Arabic, Persian, and Urdu. The Latin script is shared by hundreds of different languages: they overlap in characters but do not share exactly the same repertoire. And note that many of these languages have different alphabetical ordering (collation). The CLDR and ICU projects include specific collation data for many languages. In each case, the data provides language-specific tailoring of default Unicode collation data. (Note that this is not the same as code point order.)
It is to be mentioned in the meeting with Title: “Results of the ad-hoc meeting on Assamese” held in London on 19th June 2018 there was discussion on Assamese in Unicode with several recommendation viz. .
• It is recognized that the Assamese language and the Bengali language pronounce many of the shared letters differently. It is also noted that the script is used for other languages: Bishnupriya Manipuri, Manipuri, Sylheti, Hajong, Rabha, and Deuri.
• It is recognized that UCS character names are immutable identifiers, and cannot be changed.
• It may be possible to change the block header name, though the block property values cannot. The most neutral and least disruptive name would be “Bengali-Assamese”.
The Bureau of Indian Standards has offered to help coordinate this study. On 21st June 2018, the task for the Action was assigned to the Committee viz. JTC1/SC2/WG2 and UTC . The detailed report is available at : https://www.unicode.org/L2/L2018/18205-n4999-assamese-adhoc.pdf 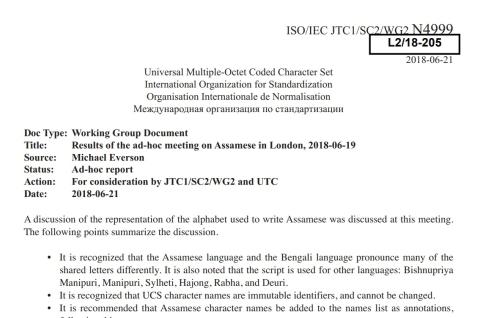